Ethnographic Research and T-Shirts in Shanghai

In May 2015, I spent a month in Shanghai and, like many westerners, smiled at the many examples of poor English I saw in stores, government buildings and well, on t-shirts. 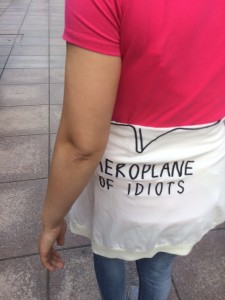 Ethnography is the study of culture and people and the products they produce.  One of the first things ethnographers do is catalogue and categorize so here is my ethnographic take on those t-shirts.

I first began by creating a list of funny things that I had read on t-shirts while I went about my business in Shanghai.  The purpose of this was not to make fun of the Chinese but to catalogue what I saw and try to understand what I saw. As a traveller, you have to look at things in a slightly different way and this gave me a chance to think about things I would not normally think about.

There are at least a few answers.  Part of me thinks that some English speaking designer with a devilish streak is trying to put one over on his fellow citizens.  This category of t-shirts are the vaguely (or not so vaguely) double entendres and bad sexual puns.  Here are a selection of a few that I saw:

“There is no one sexier than stupid”

What I don’t know is if the t-shirt wearer knew of the sexual nature of their shirt or not.  I recall that the first one was worn by a very middle aged woman who seemed more of a kitten lover than someone who’d be soliciting action on the street. But maybe the others knew that their shirt had a vague whiff of sex but didn’t think much more than that.

The second category of t-shirts are those that I think are really interesting because they are actually all about language.  This is the category of words that are used on shirts because they sound good.  The meaning of the word is not important but what is important is the sound that it conveys.  In rhetoric, this is called ‘assonance‘. Imagine reading these words and seeing them as soundscapes rather than conveying meaning.

Don’t be a puke. Vote Luck. — accompanied by a Rolling Stones logo.  (I admit I searched stores for this one)

And my favourite because once you say it, you can’t stop: 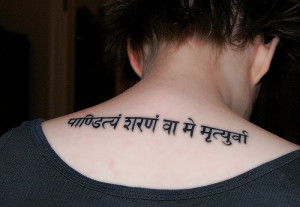 These all convey meaning because of how they sound or the way they look on a shirt. Notice the interesting parallel of the one above:  C, C, D, D and all the words have five letters.  Forget the meaning, the text is visually appealing!  This is similar to the t-shirts and tattoos people wear  that have Sanskrit or Japanese.  When we see them,  most of us have no idea what they mean but they look visually appealing and connote ideas of culture, spirituality or ‘exoticism’.  For all I know the words on this tattoo are equally amusing to Sanskrit speakers as the English t-shirts are to us.

Why I find this most interesting is that, like the Sanskrit tattoo, the meaning of the  letters (or symbols) is not important.  The sound they make or the way they look are the reason why people may have chosen the shirt.

The third class of t-shirts are idiomatic ones. These are shirts that have a clear meaning but are a bit off. Perhaps they use English in a slightly different way than we do but it’s clear what they mean. For these shirts, the meaning they are conveying is clear most of the time:

“Hello Fellow Humans, please come on me” (accompanied by a silly alien cartoon character and worn by a kid)

Yet another category of Chinese t-shirts are those that are semiotic signs.  Like Western clothing, Chinese t-shirts can be de-coded. The shirts are a sign for an independent signifier — the meaning we carry around in our head.  When we see someone with a Burberry scarf or a WWF shirt, we draw certain conclusions about them.  These are clothes that are signs. They project an idea of who we are or what we aspire to be.  In China, some of the t-shirts I saw that fit this category were:

“Malibu Rum. The joke’s on you if you buy it” (happy-go-lucky guy drinking)

These ads were dependent on the connection between the image and the text.  Together they created aspirational meaning.  The words, like in the other categories, only told part of the story. They had to be understood in the context of the image that went with them.

China has to be the knock off capital of the world but apparently there are some who are sensitive about theft of intellectual property. It was a surprise to see, in a sea of Nike and Adidas, a few shirts that proclaimed “Abercrosbie and Pitch”.  I even saw a couple of shirts with “Abidas”.

The lesson that I draw from my ethnographic study of t-shirts is a new appreciation for how words — as symbols — can be used to convey so much more than their literal meaning.  And I wonder if native Sanskrit speakers silently laugh at the Western explosion of Sanskrit tattoos.  Or perhaps, like the first category of t-shirts, Sanskrit tattoo artists are changing the words slightly, but it’s only known to a select few.

Finally there was one shirt that both puzzled and pleased me.  I’m not sure what it means but I like the idea:

“Carol Burnett lives in my soul”

Really, what more needs to be said?