Creating Social Capital one book at a time…. 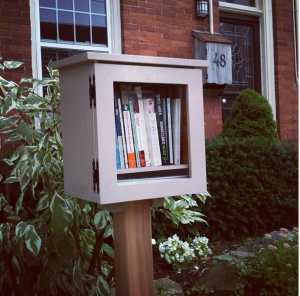 Some time ago, my family and I discussed doing a little social experiment.  What would happen if, on our front garden, we had a small box filled with books that people could take and replace?  We had heard about little free libraries from several sources but wondered if books or the library would be defaced by drunken students, passersby, or rabid anti-bookers (they must exist right?).  One my son’s believed that it wouldn’t last long and that the books would be gone and not replaced.  My other son thought that they would be defaced. Inspired by my friend, Maggie Hogan, we took the plunge.  The result of our little experiment is that after several months, hundreds of  books have been borrowed,  replaced, returned and a source of street interaction with people whom I normally might not have a reason to engage.

There has only been one book that was defaced (a Harlequin romance) and while sometimes our little free library is less full than this picture would suggest, it surprises me that it has been such a successful way to slow down people on the street.  A few have told me that they drive from the other end of the city to check out what’s new and contribute what they have picked up.  Lots have told me that it’s part of their daily routine.

Perhaps it should not have surprised me as we are often looking for serendipitous moments to connect with others and to engage in novel (if you’ll excuse the pun) experiences.  I like to think of it as creating social capital one book at time.