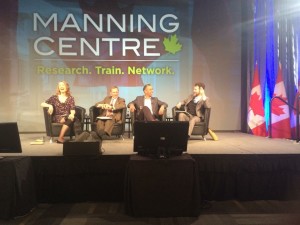 Tasha Kherridan, Nick Loenen, me and Scott Reid at the panel on electoral reform.

On February 27, I was asked to speak on a panel about electoral reform with former B.C. MLA, Nick Loenen and Conservative critic for Democratic Institutions, Scott Reid at the Manning Centre Conference in Ottawa.

Nick made the case that single transferable vote would be the best option for any reform while Scott argued that there were many unknowns about any reform and that the Conservative Party’s position was officially agnostic but that a referendum was essential in validating any electoral choice.

For my part, I argued first that the conversation about electoral reform has been wrong. It has placed the cart before the horse by talking about systems. Instead, any reform should begin with ideas about what values and principles should underpin the electoral system we want.  The system is a product of those values.  Second, I suggested that the process of reform

(how we decide what we decide) should be deliberative and engage Canadians in a meaningful way. I don’t think traditional modes of consultation will be adequate but would love to see some kind of deliberative body, such as citizens’ assemblies, help the government frame the values and principles that should underlay any new system.

On the issue of the a referendum, there are compelling arguments on both sides but my position is ‘referendum if necessary, but not necessarily a referendum’.  The benefit of a referendum is that it confers legitimacy but the biggest problem with it is that referendums are notoriously blunt instruments.  A citizens’ assembly — where real learning, deliberation and consultation takes place  — is actually a higher threshold for legitimacy than a referendum which is not known as a place where civic education and deliberation occurs.

The issue of whether a referendum may ultimately be decided by the Court which will make a determination about whether S. 44, Constitution Act allows the federal government to act unilaterally to make changes to our voting system.  In the Senate Reference case, the Court held that it was not sufficient to act unilaterally as “the purpose of [consultative elections] is clear:  to bring about a Senate with a popular mandate” and that such a change “alters its fundamental nature and role.”

2 Responses to “Electoral Reform at the Manning Centre Conference”