Bitter sweet:  After 18 years, 3 new and risky heart surgeries, 3 pacemaker replacements, and countless ‘tune-ups’,  today was Nathaniel’s  last visit to the amazing Sick Kids Hospital.  He “graduates” to Toronto General but it will be hard to match the superb care we received here.  As a 5 day old baby he was flown from KGH to Sick Kids in a January blizzard.  It took him 9 hours to get there.  Since the plane and helicopter couldn’t land, they had to take him by ambulance. When we arrived in Toronto, we were given 3 options:  a heart transplant, 3 risky surgeries or let him go.  We chose the surgical option which had a high mortality rate and later heard that he was “one of those kids we didn’t think would make it”. The weather on the night of his first surgery was so bad that they put the entire surgical team up in a nearby hospital.  The surgeon was there the entire day and through the night treating a very tenuous baby.  That level of care would foreshadow the quality and dedication of those at the hospital for our entire time.  We’ve been lucky to have had the same cardiologist, the uber competent, caring and unflappable Dr. Jennifer Russell  throughout our journey who, when we began, was just starting out her career as a cardiology fellow. Both she and Christine Chiu-man, the pacemaker tech, have endured my endless questions with patience and good humour.

The cardiac floor — 4D — is a hard place to be for any length of time.  We’ve seen friends thrive and others sadly not make it through. We’ve celebrated Easter in the hallway when the nurses turned a blind eye to the table we set up with our take-out feast complete with ‘grape juice’ we smuggled in.  We’ve had countless friends and family bring us food and keep us company during our months-long stays.  And throughout it all we’ve been grateful.

Nathaniel has wowed the doctors along the way. In cardiac failure as a three year old at 2 AM, he told the doctors “it’s time to wake up because my heart said so” immediately after getting his first external pacemaker hooked up.  As an 8 year old, he told jokes to the surgeons as he lay on the OR table just before going under.

It’s a place that family-centred care is not just a buzzword.  In hindsight I am impressed that no one laughed when during  surgical rounds I shared my medline lit review on different surgical techniques used in the Fontan surgery and asked the surgical fellow to defend his proposed approach (making reference to the literature, of course!).  Or when I pleaded with the surgical team that Nathaniel had chylothorax.  The surgeon, Dr Glen van Arsdell, ever the empiricist, asked me to explain why I thought so. Five minutes later after making my case, he was rushed to ICU where he was treated for it immediately.

I’m not one to gush about institutions but The Hospital For Sick Children is really a jewel in our health care crown. It is deeply research intensive, innovative and multicultural in ways that frankly restore my faith in humanity.  Doctors from all parts of the world are  blind to nationalist, ideological or linguistic differences that might be evident in other contexts.  The unrelenting drive for quality patient care restores my faith in our health care system and reminds me how much children, especially those of us who are lucky to live in Canada,  are hostage to fortune. 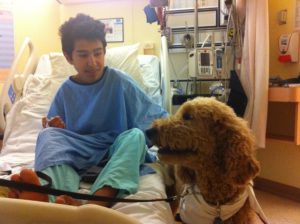 It’s bitter sweet because while we are thrilled Nathaniel has survived and thrived, for 18 years we have taken comfort in returning to the place where we knew he would be cared for.  Anyone who has struggled with a child with a complex health condition knows exactly what I’m talking about.  We won’t ever be able to repay the psychological and real debt from Sick Kids and as we left today a part of me thought that while this is another day in their work it was a pretty profound one in ours.

8 Responses to “A Bitter Sweet Goodbye at Sick Kids Hospital”