I was thrilled to hear that a book I co-authored along with my colleagues, Patrick Fournier, Henk Vanderkolk, R. Kenneth Carty, and André Blais was the recipient of the Seymour Martin Lipset Award for the Best Book from the Canadian Politics section of the American Political Science Association.

The book is called When Citizens Decide:  Lessons From Citizen Assemblies on Electoral Reform. 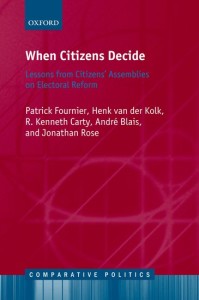 The  Seymour Martin Lipset Best Book Award “is given to honor a significant contemporary contribution to the scholarship on Canadian politics, or Canada in a comparative perspective, or a comparative analysis of Canada with other countries, particularly the United States.”  It will be given at APSA’s meeting in San Francisco in September 2015.

I’m honoured to be recognized in the company of such impressive colleagues and happy that the book is contributing to a conversation about the role of deliberative bodies in a democracy.