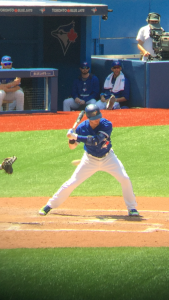 So, this is not about political science, the federal election or university teaching.  It is about something that has been consuming probably too much of my time these days:  baseball.

Like many, I have been following the Toronto Blue Jays with great interest this year, more so than in the past.  As I been discussing the arcane world of baseball stats with my son, Nathaniel,  and colleague David Haglund, I remembered how much of baseball is about numbers. David and I had a discussion about David Price’s Wins-over-replacement which in my mind, has just too many confounding variables to be meaningful but is typical of the idiosyncrasy of baseball stats.  (Did you know the Jays have only lost games on days that that end in Y?!)

This weekend, the Jays played the LA Angels and scored more runs (36) in a three game series than they ever have in a three game series (on days that end in Y). This got me thinking of the importance of run differential which according to Victor Mather, of the New York Times,  is a key indicator of success. Writing two weeks ago, he predicted the Jays’ record should be .588 instead of .495 they had in early August.

He based this on the Pythagorean Win-Loss stat created by Bill James. It states the following:

Following this formula, the Jays (as of August 24) look like this:

It turns out that the Jays’ record of 69-55 is lower than they should be which makes them an “unlucky” team according to James. Technically, they are playing below where they should be given how many runs they have scored.  And, according to the New York Times Victor Mather,

“Any team that has a scoring differential significantly better than its record, no matter what the sport, is a team to watch. Statisticians have shown that the run differential is a better predictor of a team’s future record than the team’s actual record.”

This just made things a lot more interesting.